Here is a triptych I out together from some of my shots taken while hiking in the mountains surrounding Boulder, CO.  Not my usual images but I like the subtlety of colors, this captured the dreary weather that would roll in and out during the day.  Working on these images from Boulder really makes me wish I lived there, maybe someday I will be able to convince my work that I can telecommute from there :)

"Boulder Mountains"
Holga
Posted by GreenSt at 10:43 AM 0 comments

I am sure I am not alone in often finding it difficult to find photographic inspiration where I live.  I have taken to heart the advice given by a good photographer friend many years ago, I almost always have a camera on me.  You can't take a picture if you don't have a camera.  So even if I am just going for a stroll in the neighborhood you will often see me with some sort of messenger bag and there is likely a camera or two tucked away inside.  I don't really have any specific images I am out to grab, but want to be ready if I see something.  And 9 times out of 10 I return home with out a single image snapped.

The opposite is true if I am traveling and walking around a new place.  The cameras are out and my problem is putting them away.  This becomes a bit of a problem when traveling with someone else as I am always torn between wanting to grab the shot and not ignoring or making my traveling companion feel uncomfortable.  So why is it that I can't find the same inspiration where I live?

Part of the problem is where I live.  I live in Old Town Alexandria which is a very nice, touristy little part of Alexandria.  The streets are lined with crafty stores in 100 year old buildings.  The people who line the streets are mostly camera wielding tourists and Old ladies out to but the latest crafty decoration for their house.  In other words not what I like to shoot.  There is also the fact that because I live here I often feel like I can always come back another day when the light is better and grab the shot.

The usual challenge given to intro to photography students is to go out to where you live and try and find new ways of seeing the familiar.  It's a great exercise, but having lived here for almost 10 years now I think I have done all I can do.  But I still take my cameras with me and every once in a while I do snap a pic or two. 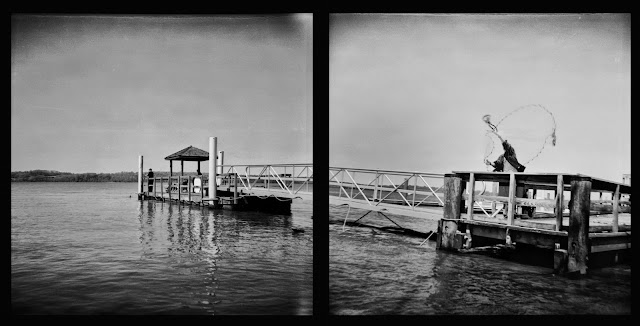 "Fishing on the Potomac"
Holga, Ilford HP5
Posted by GreenSt at 10:33 AM 0 comments

One of the things you learn in any good beginning photography class is to try and judge your images for what they are not what you want them to be.  In other words to detach yourself from the emotions of why you took the image to see if it actually works as intended.  To often when first starting out we want every image to work and end up getting attached to the idea of the image rather than how successful it is.  You learn quickly that being dispassionate can help you get better by forcing you to go back and revisit a failed attempt.

Well sometimes apparently the reverse is true.  Last year I had what I thought was a brilliant idea for a shoot.  Most of the time in my photography I am out and about and shooting in the moment.  Street photography does not lend itself to planning in advance.  You can't decide on the image you want to capture and then go out and find it.  You have to think and feel on the fly and react to what is around you.  Even when I do studio portraits I approach the shoot much like I do my street photography.  I react to my subject and try and find something interesting.  I may have a few ideas going in, but I always end up either finding something totally different or making the original idea better.

Back to the point.  I had a great idea.  I hired a model.  And spent an evening shooting.  The results were not what I had in my head. FRACK! I have spent a lot of time trying to learn from what didn't work, but I have yet to go back and re-shoot.  I will one of these days once I know I have a good idea where to go.  So after review the results from that shoot and working a few images into the vision I originally had I ended up realizing that I didn't have what I wanted and left the images alone for about a year.

Recently I went back and looked at them with fresh eyes.  nope still not what I originally wanted, but since my original concept required the combining of two images to create two personalities in frame I never had looked at the individual images on their own.  I had always looked for the combinations that would convey the story I wanted to tell.  It turns out that there are many images that work quite well on their own.  Below is one such image.  Let me know what you think and tell me what story this image tells you.

The moral of the story is to periodically review your old images.  They may not have worked for what you originally intended, but maybe with distance you can find something you didn't see originally.

For those of you that care.  This image was originally shot using Polaroid Sepia film.  It was scanned, cleaned up and adjusted.  I also converted the image to B&W using Silver EFEX Pro and then allowed a hint of the sepia tone to blend back in.  I know I know to some of you altering a Polaroid (or any image) is sacrilege, but for me I will always see the image captured as the starting point not the end. 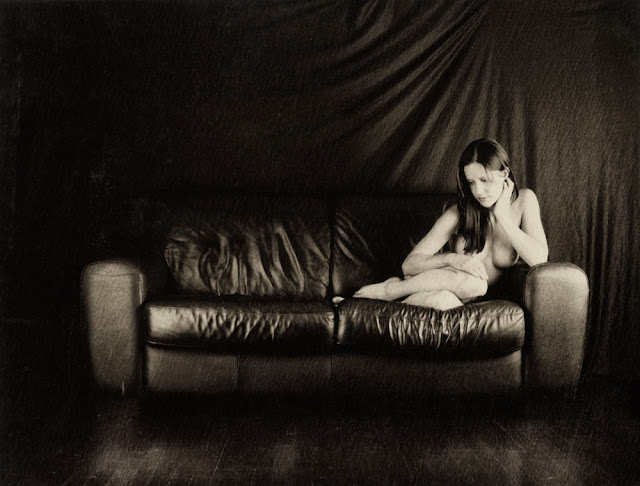 Email ThisBlogThis!Share to TwitterShare to FacebookShare to Pinterest
Labels: Polaroid

Here is another image taken above the tree line in Boulder, CO.  And even more surprising yet another color image.  I probably should go to the doctor because something is obviously wrong with me these days. 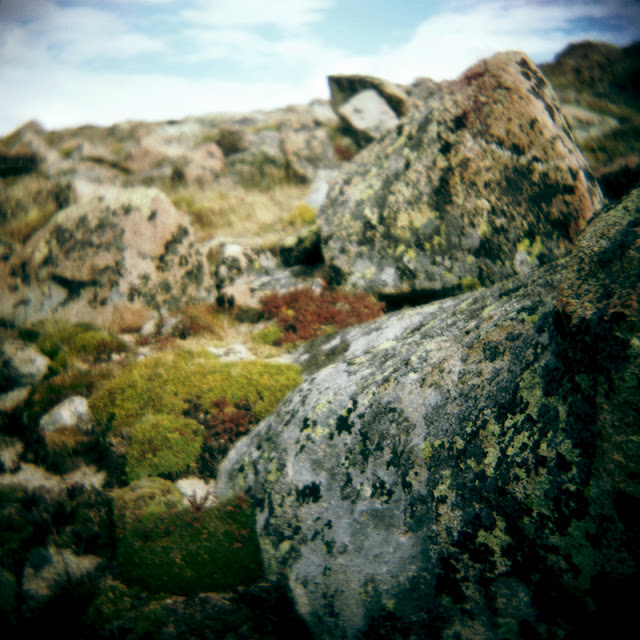 Above the tree line

Ok so yes I still have more images to edit and show from my trip to San Fransisco, but I have also started working on some of the images from the end of that trip where I sent a few days with good friends in Boulder, CO.  So here is the first.  This was taken on little tour my friend Brian took me on of the local parks.  We started the day by packing lunch and cameras and heading into the mountains.  This image was actually taken towards the end of our day.  We had driven up past the tree line and got out to hike a bit and take some pictures.  It was actually pretty cold so the hiking got cut short since we hadn't really planned for this weather.

And yes this is in color which is very rare for me, but I think you will agree it works much better in color than it would in B&W. 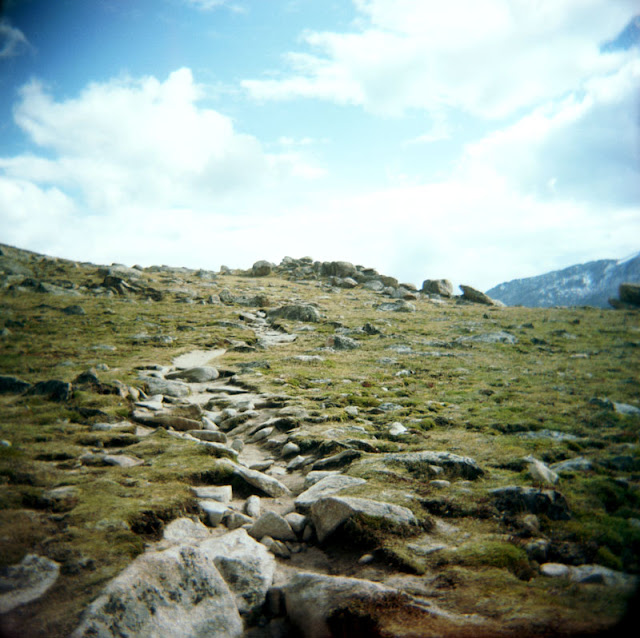 "Above the Tree Line"
Holga
Posted by GreenSt at 11:14 AM 0 comments

Ok so here is my take on the required Golden Gate Bridge.  I'm still not 100% sure it doesn't need a crop, I left the bike on the left just because many of my images from this trip are about bike culture.  I think it is probably a little distracting so I am sure if I ever print this image the bike will be gone. I am also going back and forth on color vs B&W but since I pretty much always show my B&W I thought I'd go against my usual instincts and show the color.

"Golden Gate"
Holga
Posted by GreenSt at 9:54 AM 0 comments

As you can tell I love me some bike culture!  Here is yet another image near Delores park with some fixie's being walked.  In their defense they are walking on the side walk as they should be :)

Well I am coming to the end of the images I captured in San Fransisco, only a couple left and then I will start on some of the images I took in Boulder, Co.  After that I guess I will have to get off my butt and develop the 3 rolls of color film I've had sitting around now that I finally have everything I need to try my hand at color developing. 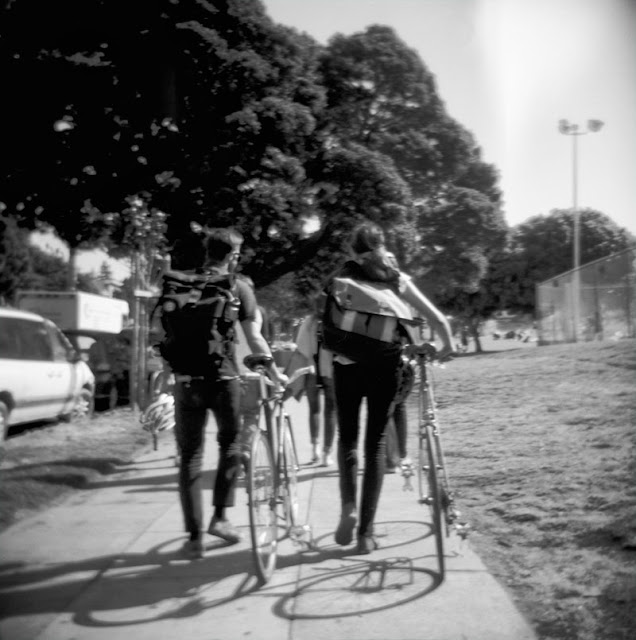 "Walking some Fixie's"
Holga
Posted by GreenSt at 10:30 AM 0 comments

More from my "series" taken in Delores park during my visit to San Fransisco.  I am sure it is becoming obvious that I fell in love with this park.  If I lived there I would most likely spend most of my free time there.  As a photographer and avid people watcher this place is a gold mine for "street" style photography.  It's strange because I live in a great city (DC), yet there is no place I can go and find such a diverse street life.  In New York and San Fransisco you never know what you are going to find around the next corner but at the same time I never go a day without plenty of subjects and photo ops.  DC has good diversity and plenty of culture and counter culture, but I find it is much harder to just walk around and find great subjects for street photography.  Maybe it's because there is so many tourists, but I rarely try and shoot in the obvious tourist areas.  Maybe it's because this is my home town and everything seems more normal to my eye's.  Who knows.  My plan for this year involves getting into the city more this year with camera in tow to try and capture DC's culture.  I figure it is where I live, I should focus n shooting the people who live here more.  Hopefully I will succeed. 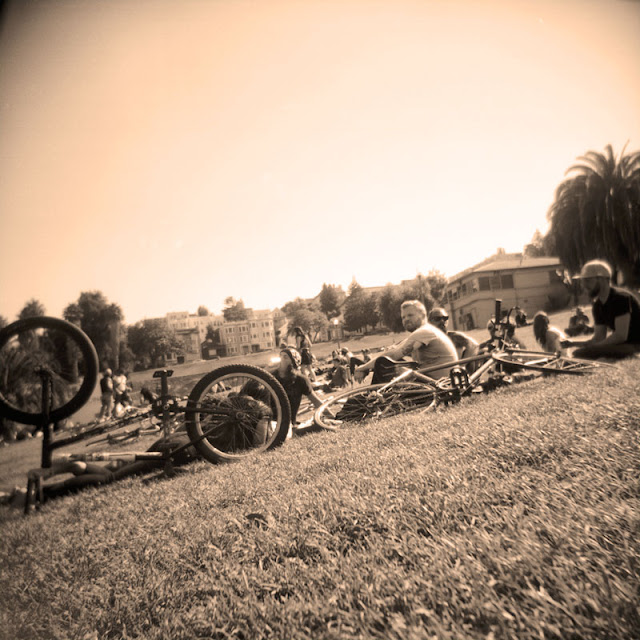 "Bikes and Beers!"
Holga, Kodak Porta, Converted to B&W and toned
Posted by GreenSt at 11:10 AM 0 comments